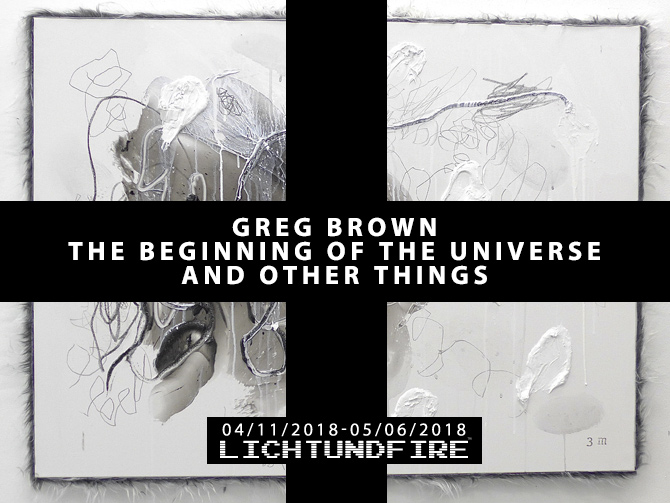 Please join Lichtundfire and the artist for an INFORMAL, LIGHT GALLERY BRUNCH in conjunction with LES EARLY MORNING for The Beginning of the Universe and Other Things, an exhibition of mixed media paintings by Greg Brown (Gregory Joseph Brown).

In this solo exhibition, Greg Brown explores drawing as paintings by way and inclusion of non traditional materials such as fake fur and tiles. His Shaved Fake Fur and Scribble Paintings, predominantly monochromes or black and white, emphasize the medium as vehicle, leaving its marks lines, shadows, stains, shapes, drips and blobs. Overload vis a vis maximum impact with minimal line shape- an explosion of mark-making combined with calculated composition. Free, uncurbed expression delicately balanced with a carefully orchestrated vocabulary.

Greg Brown is a master of materials. He became a process artist while working as a scenic artist in Hollywood, with an access to an array and abundance of materials, he then started using in his own works. Being exposed to this environment created a platform and catalyst for Brown’s practice of distinct yet playful exploration of abstract representation and plain thought. Brown’s own creative thought processes revealed with means of non- traditional art materials, and aided by playfulness and humor, became res causa et ipsa, the cause and the thing itself.

Greg Brown was born in Reno, Nevada and grew up in Nevada and California in the 1960’s and 1970’s. He graduated with a B.A. from USC School of Cinema, focusing on animation and film editing, and also earned a B.F.A. in Fine Arts from Pasadena Art Center.

Brown worked as a scenic artist and set painter at ABC-TV studios in Hollywood. He painted sets and backdrops for sitcoms and many award shows, like the Grammys, American Music Awards and Muppet Specials. His own collage paintings became more tactile with fake fur and flocking when volunteering at the Braille Institute in LA.

He first showed in various group shows in LA, including Rosamund Felsen and L.A.C.E., before relocating to New York, originally for scenic work. His first solo show in New York was a White Room Show at White Columns in 1993. After briefly working as an artist assistant to David Deutsch and William Wegman, Brown attended Skowhegan School of Painting and Sculpture in 1995. He returned to Skowhegan for two more years, in charge of setting up its video and digital media lab.

Recent shows include several curated group shows at Lichtundfire such as Summer Sex I & II, Bound by Matter, Apocalypse Yesterday/ Tomorrow or the Cultural Inability to Change the Future, Past as Prologue – Or the Influence of Modernism on Contemporary Art, LOVE FEST- Seriously and ENCORE.