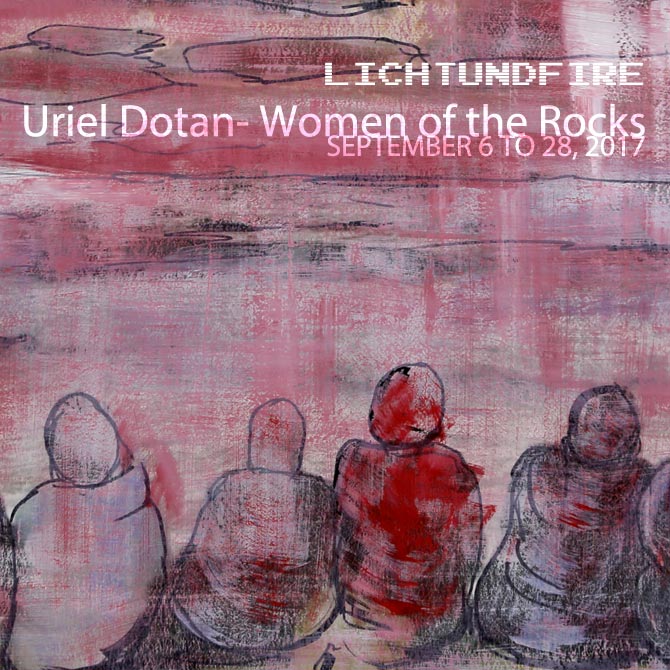 Lichtundfire (director, Priska Juschka) and Beez and Honey (Nicollette Ramirez) are pleased to announce their collaboration on Israeli artist Uriel Dotan’s solo exhibition of work from his series Women of the Rocks.

Dotan takes photographs, and then draws on the images of women who come from the occupied Palestinian territories to Tel Aviv, Israel to spend the day at the seashore.

Building on his background in digital art and painting, his works combine art historical techniques and references that are both ancient and of our time. The Bathers is a theme in Western art history that painters such as Picasso, Cézanne, Seurat and others, have often explored to capture the essence of their time.

His subjects, in muted pastel tones, look as if they have stepped out of a 19th Century painting by Corot, surrounded by an atmosphere reminiscent of eternal dusk.

His mixed-media technique of photography, painting and print on canvas or paper gives his works a varied texture and depth. The combination of figurative and abstract elements adds further, conceptually, another dimension to the artist’s technique and subject-matter.

Surely these works have an inherent political discourse, but more than presenting solutions, they raise hope as exemplified in two works depicting a mother and a daughter. The woman is holding the girl’s hand as they look down at words written in the sand. The bond between the two, while understated, is unmistakable. In the companion image, the woman appears to be taking a picture of the words written in the sand while the child gazes down, reaching out to touch the woman’s dress.

Dotan may be suggesting that, like the day that draws to an end, all conflicts must finally come to an end- washed away by the cleansing waters of the sea, the ‘rocks of controversy’ must dissolve.

Dotan created this body of work in 2014, while in his studio at Mana Contemporary in Newark NJ, under the patronage of Eileen Kaminsky and the Eileen S. Kaminsky Family Foundation (eskff).

He has exhibited his work in galleries and museums since the 1980s. He was one of the early proponents of digital art in NYC.