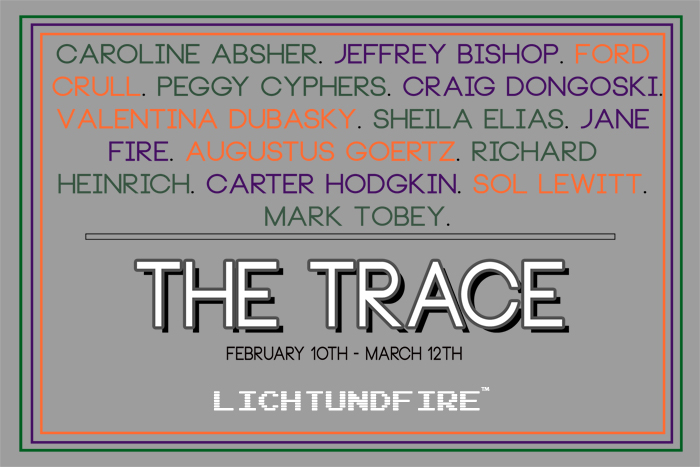 RSVP Opening Reception Lichtundfire is happy to announce THE TRACE, a group show comprised of Artists Working in Various Media Linked to Mark-Making. Inspired by the deconstructivist ideas of French writer, theoretician and cultural critic Jacques Derrida, this exhibition is based upon the principles of the absence of presence or, in reverse, the presence of absence. There is a realm beyond what can be seen with the bare eye, or to what the mind can fathom. An introduction by Peggy Cyphers:
French philosopher and literary critic Jacques Derrida uses the term trace in literary criticism, to describe the remnant of all non-present meanings, sounds, or written markings on the page– especially in the sense that features are identifiable only by the absence of other feature. The act of mark making in painting and drawing leaves behind its trace, the sign for everything elusive, the evidence of everything it is not, as a visible impression of the indeterminacy of space and thought impression. Both painting and poetry leave in their path clues that something has been present, a spark, a tag, in a just-barely detectable amount, a suggestion of quality.

Can technology claim such a position? Can evolution into the ultimate heights of technological advancement, leave behind its trace? Painting and poetry embody that indeterminate meaning as space and thought. In their ambiguity, painting and poetry create new thought connections, reflecting unseen future histories and memory.

Wallace Stevens first delivered “Relations Between Poetry and Painting” as a lecture at the Metropolitan Museum of Art in 1951. In this essay, Stevens explored the parallel attributes of poetry and painting. Wallace’s thesis is based on the notion that, in an age of disbelief, the arts in general are a “…compensation for what has been lost.” “…men feel that the imagination is the next greatest power to faith, the reigning prince.” Because poetry and painting operate at the juncture between imagination and reality, these arts assume a prophetic stature and become a “…vital assertion of self in a world where nothing but the self remains, if that remains.”