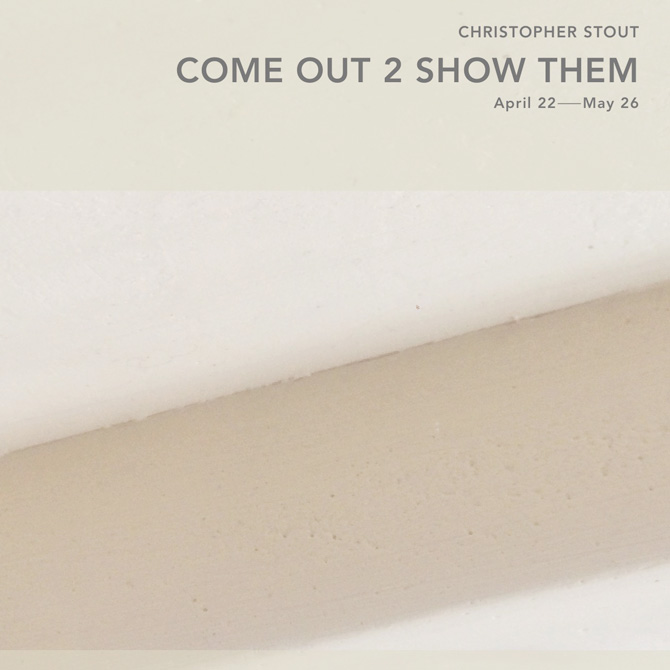 Lichtundfire is pleased to announce COME OUT 2 SHOW THEM, an exhibition of intimate-sized, abstract minimal paintings by New York based artist Christopher Stout. This marks the second New York gallery solo show by the artist, and also his second project with the gallery. Christopher Stout was previously included in the group exhibition, Chewing Tar, Industrial Materials in the Service of Art, curated by Linda Griggs.

For this exhibition, Christopher Stout has conceived a new series of paintings, constructed from sanded cylindrical and rectangular-shaped plaster molds, and mounted on Belgian linen on board. This body of work conceptualizes visually the ideas and paradigms of the Western Reductivist movement, while at the same time exploring the creative traditions of the acceptance of transience and imperfection within the Japanese philosophy of Wabi-sabi.

Strikingly similar and purist, but not quite perfect nor identical, the installation of these small size paintings hovers aesthetically and philosophically between the reductionist assumption that every thing and every idea can be reduced to its more simple and coherent form while taking into account, emphasizing, and shedding light on the imperfections which come with all things created.

Christopher Stout was born and raised in suburban Maryland and lives and works in New York City. An artist, art writer, curator, and gallery director of ADO Project (Art During the Occupation), formerly Christopher Stout Gallery, Christopher Stout has received numerous public recognitions for his endeavors in each of these categories.

Some notable mentions include:

“Curator to Watch” for his Armory week presentation during SPRING/BREAK Art Show with artist Rick Herron (Artsy, March 2017)
Ranked #32 in “The 100 Most Influential People in Brooklyn Culture” by Brooklyn Magazine (art critic Paul D’Agostino, Brooklyn Magazine, March 2016)
Ranked #01 in “Who is Who” in Bushwick Daily for his work as founder of the 3-year artist lecture and exhibition project Bushwick Art Crit Group (Katie Killary, Bushwick Daily, September 2014)
One of “12 Artists to Watch” for his presentation during Bushwick Open Studios at Brooklyn Fire Proof (Holly Shen, now Director/Dept. Head, Visual Arts at Brooklyn Academy of Music, May 2013)